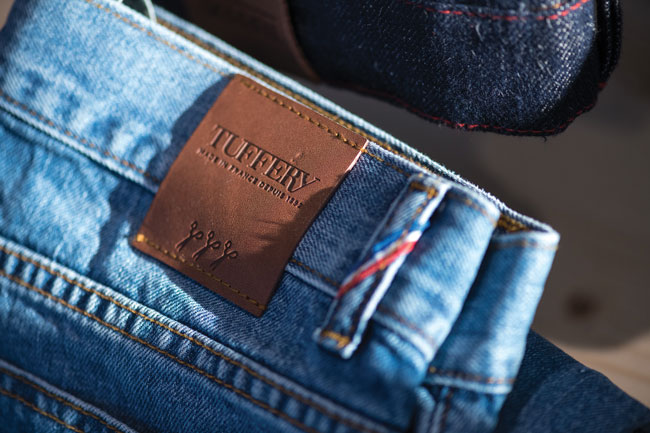 In the heart of the Cévennes, Julien Tuffery carries on a grand family tradition. His great-grandfather created work trousers 130 years ago using the famous ‘de Nîmes’ fabric. Today, Julien and his wife Myriam run the oldest jeans factory in France. Patrice Bertrand reports.

“I wear my own jeans and like all denim purists, I don’t wash them often. A pair of raw jeans shouldn’t be washed frequently. For my year, I rotate between four or five pairs of jeans which I wash about three times. What damages jeans is not wear, it’s washing, especially in a machine: for an hour, it rubs fibre against fibre and erodes it. A pair of jeans washed too often will quickly fade.”

With his singing accent from the Cévennes region, Julien Tuffery, sporting denim from head to toe and a fashionable haircut and beard, knows what he is talking about: at 35, he’s the dynamic owner of Atelier Tuffery, the oldest and last manufacturer of jeans in France. Passionate and talkative, he is the heir of a long line of master tailors of jeans.

“Exactly 130 years ago, in 1892, my great-grandfather, Célestin Tuffery, had the idea of using the raw indigo-dyed fabric then being manufactured in Nîmes to make work trousers,” Julien proudly recounts. “Because it was strong and cheap, it was ideal for making industrial clothing for the influx of workers building railroads nearby. He was only 17 when he opened his workshop in Florac and he went himself to buy fabric in Nîmes, 100km away.”

Thanks to this ‘de Nîmes’ – or denim as we now know it – fabric, Célestin Tuffery probably invented jeans in France, at about the same time that Levi Strauss, on the other side of the Atlantic, had already started to make jeans for California gold-diggers.

Today, Julien’s workshop is located in the very town where his great-grandfather opened his factory: Florac-Trois-Rivières, a picturesque village in the Lozère department, in the heart of the Cévennes National Park, amidst cattle, sheep and goat farms.

But times have changed: Atelier Tuffery now makes ‘eco-friendly’ jeans bearing the ‘Made in France’ label. Entirely handmade in facilities combining traditional savoir-faire and modern technology, three-quarters of production is sold online and the rest in the on-site boutique. Ranging from €119 to €290 per pair and more for custom-made organic cotton models, the jeans are guaranteed for seven-day delivery in 28 countries. The clientele of this flourishing business are young urbanites who want better quality and who reject products not coming from a ‘short supply chain’ alongside jeans costing €10 in a fast-fashion store.

Orders burst at the seam

“We make 40,000 pairs of jeans annually, three per cent of sales in France,” explains Julien. “It’s a micro-drop in the fashion ocean, but a drop growing each year. In 2020 and 2021, because of Covid-19, internet sales have exploded. Ten years ago, the ‘Made in France’ label wasn’t fashionable. Today, our order book is full.”

Yet Atelier Tuffery and its state-of-the-art website almost didn’t exist. In the 1950s, Célestin’s son, Jean-Alphonse, succeeded in transforming jeans into a fashion product, following in the footsteps of American brands. But in the 1980s, the company, renamed Tuff’s, was hard-hit by Asian and North African competition. In 1985, it was doomed to decline and only a few seamstresses and Jean-Alphonse’s children – Jean- Pierre, Jean-Jacques and Norbert – remained. They had to close the workshop and kept only a simple boutique, which struggled for years. Fortunately, in 2016, Julien, Jean-Jacques’ son, and his wife Myriam, both engineers, decided to quit their lucrative jobs to take over the family business. Their objective was ambitious: to revive it at all costs and perpetuate the unique know-how passed on by Célestin Tuffery.

“Initially, my father and uncles tried to dissuade us,” says Julien. “They had endured too much themselves. But we wanted a meaningful project which would also be ecological, societal, human and economic. We were lucky because they had the wisdom to say, ‘Listen Julien and Myriam, we are completely out of touch with Facebook, Instagram, the internet and e-commerce. If you want the business, take it, we won’t interfere’. Then they showed us their hands and said, ‘but you should know that we can be pretty damn useful!’.”

Before beginning the journey, Julien and Myriam did economic studies on the jeans market and consumer trends. Since 2016, the picture has hardly changed: France, with 90m jeans sold annually, represents ten per cent of the European market. Only four countries account for more than 80 per cent of the production imported into Europe: Bangladesh, Turkey, China and Pakistan. When they reach the consumer, the jeans have often travelled over 65,000km.

Convinced that new consumer trends focusing on eco-ethics and buying local offered an opportunity, Julien and Myriam figured they had a card to play in the ‘Made in France’ niche. Now owners of the company, they changed Tuff’s to its historic name Atelier Tuffery and revived it: sewing patterns formerly drawn individually were replaced by digitised templates and the product range, which was limited to trousers, expanded to include skirts, aprons and shirts. Their marketing strategy targets end customers through social networks, influencers and a newsletter. Top priority: sourcing locally where possible and marketing the brand so the majority of value goes back to the workshop and not distributors.

Yoga in the workplace

“Everything you see on our website, absolutely everything, is made in France or Europe, the majority by our workshop and the rest by partner networks,” explains Julien. “We work with four weaver-spinners located in the Vosges, the Tarn, the Basque country and northern Italy. Obviously, our costs are quite high. And since 80 per cent of the cost of manufacturing jeans is labour, our products are expensive. That said, they’re not necessarily more expensive than jeans from a big brand manufactured far away. In terms of societal cost, they’re perhaps even less expensive: they’ve not travelled around the world several times before reaching the consumer and the hands that make them are the hands that sell them.”

The hands that make them are those of 12 seamsters and seamstresses in the sewing workshop. “Each one carries out six or seven different operations hourly, the time it takes to make a pair of jeans from A to Z,” explains Julien, who is proud to show people around his workshop, which is always open for customer visits. “Today, as no one wants to work on an assembly line, we train our staff to be multi-skilled. After a year and a half of training, which is a long time and very expensive, each worker knows how to do everything. It goes without saying that our employees are extremely precious to us.”

So precious, in fact, that every morning the 25 employees do 15 minutes of yoga before work. “The training lasts a year and a half, but in fact, excellence only comes after three, four, or five years and, after ten years, you can reach the status of master craftsman,” says Julien. “So, if these people start to get tendonitis or carpal tunnel syndrome after three or four years, I’ve lost all my investment. So, like high-level athletes, and to avoid all the problems linked to our job of manipulating fingers, we warm up, we stretch, we warm up, we stretch. In my opinion, it’s a fantastic investment over time.”

“A pair of jeans is immortal”

This year Julien and Myriam, who have two children, will start construction to increase the workshop’s size fourfold and they hope to continue hiring. However, growing too much is out of the question. “We don’t want to embark on large industrial projects that would reproduce the same mistakes that led the industry to bankruptcy,” says Julien.

“We’re aiming for 100,000 jeans annually and then we’ll stop growing. We prefer to rely on common sense.” In common sense logic, Atelier Tuffery doesn’t manufacture anything in advance. “What’s the point of taking pieces from our workshop that will be sold a year later?” asks Julien.

“Our way is to avoid waste and overstocking. We have a direct-sales business model and we can reinvest all our money in staff training and machine modernisation.” In the same spirit, Atelier Tuffery strictly refrains from launching a new collection every six months or so. “We work on absolutely timeless, beautiful and perfect pieces, those that our customers have been attached to for 20 years, straight and fitted jeans,” explains Julien. “Similarly, we don’t do winter and summer jeans.”

His jeans are so timeless that they can last for years and even be repaired. “If done right, a pair of jeans can last a very long time,” says Julien. “Sometimes we’ll fix a button on five-year-old jeans in pristine condition. But it depends how they are used and on the morphology of the people wearing them. For example, big thighs tend to wear them out very quickly on the inside. So, we repair, we don’t hesitate to patch them up because a pair of jeans, if you accept its ageing and patching, is in itself immortal.”

For now, production remains limited, from 30 to 250 pieces daily, and Julien’s 72-year-old father and uncles continue to come in every day. Jeans are their whole life and their passion. By their presence, they teach young craftsmen the trade. The whole secret of the longevity of the Tuffery workshop is based on passing down tradition.

“What’s funny,” adds Julien, “is that we still do the same job as my great-grandfather did: master tailor. I often enjoy saying that the little success of Atelier Tuffery is the marriage of a 130-year-old trade with all the modern resources of a young start-up built to communicate, digitalise, sell and talk to customers. And it works incredibly well.”

Incidentally, Julien and his team have made the ultimate tribute to great-grandfather Célestin: with its classic straight cut and high waist, the company’s historical model bears his name. Timeless, you see!

Previous Article Les Gets: The Best Summer Break in the Alps
Next Article Restaurant Review: Hein in Lille