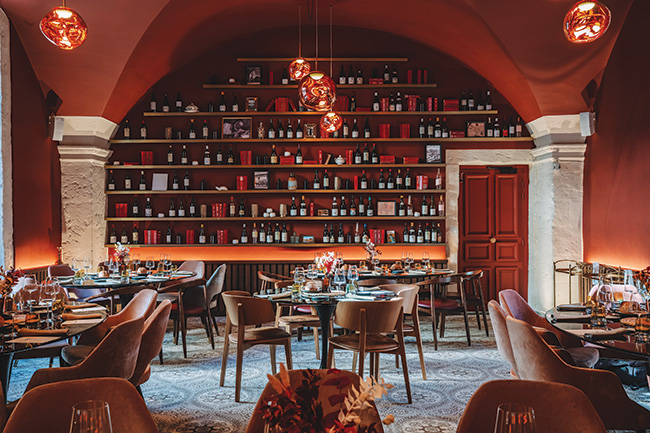 Alexander Lobrano heads to Nîmes to discover the delicious offering at the new Hôtel Margaret Chouleur.

Benin-born chef Georgiana Viou comes from a long line of female cooks and caterers in Cotonou, the West African country’s largest city, so it’s not altogether surprising that, having studying literature at the Sorbonne in Paris, she eventually threw over a career in public relations and went into the kitchen. “I’m a
woman of two souths,” says Viou, who has taken the helm at Rouge, the restaurant of the stylish new Hôtel Margaret Chouleur in Nîmes. “I cook with the palm oil of Benin and the olive oil of Provence, because I’ve lived in Marseille for more than 20 years now.”

But Viou doesn’t do fusion cooking. “I think this kind of muddling is sort of messy,” she explains. Instead, she favours a very personal, contemporary French style of cooking that is inspired by Africa, Marseille and France. “I tend to layer tastes,” she says. “I think of cooking like painting, where you want to create contrasts and surprises, but with subtlety.” She adds: “What’s most important to me is to cook with the best quality seasonal produce.” Thus Viou often shops at Les Halles de Nîmes, the city’s covered market. “I find beautiful food in this market,” she says, adding: “The Nimois love to eat and the quality of the produce reflects this. Nîmes has a curious and discerning palate, which is why it’s been a pleasure and a challenge for me to cook here.”

Viou’s menus evolve constantly but the prix-fixe menu a friend and I recently enjoyed in the pretty, plant-filled patio setting of the restaurant began with a roasted prune topped with some brandade de morue (salt-cod purée, a speciality of Nîmes), an offbeat but delicious combination of flavours and textures. Then came a refreshingly summery ‘tartare’ of tomatoes and nectarines with a vivid jus of tomatoes and peppers. Next, carpaccio of grey mullet in coconut milk spiked with wild sorrel and a garnish of cosmos flowers, and a main of roasted mullet fillets with grilled aubergines, tomatoes and potatoes.

If every course of this meal shimmered with originality and the precision of a highly gifted cook, it was the dessert that left us dumbstruck. A ganache of blond chocolate with a bracingly sour coulis of hibiscus jus and crushed meringue was seasoned with powdered black olive and accompanied by a pineapple sage sorbet – a stunningly original combination of European and African perfumes and textures.