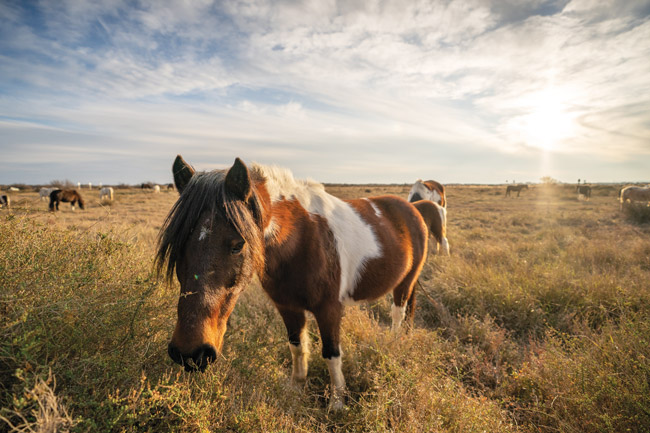 Justin Postlethwaite heads to Aude and Hérault in the sunny south to discover wildlife conservation and human endeavour in perfect harmony.

On a scorching summer’s day at Sigean African Reserve, the 300-hectare animal park located between Narbonne and Perpignan in deep-south Occitanie where more than 3,800 animals are free to wander as if ‘in the wild’, I take my lead from a lazing impala, sensibly ensconced beneath a tree.

In the relative cool offered beneath my own shade provider, I am taking a much-needed water break during a marvellous walking tour of the ‘African Plain’, ‘Chimpanzee Island’ and lagoon fringed by huge flocks of pink flamingos. Later, I spot some of the park’s ‘big guns’ such as rhinos, hippos and lions along a special 7.5km trail accessible only by car (for obvious safety reasons). It’s a magical experience, and as close to an authentic safari as you might imagine on European soil, albeit under a sweltering Languedoc sun akin to the animals’ homeland. Add in the grande volière (aviary) featuring all manner of exotic winged beauties, a vivarium with crocodiles and chameleons plus the snake-centric maison tropicale and you have the makings of a truly memorable day out for any animal lover. With childlike wonder, you will point and gasp in awe as a chilled-out giraffe gnaws leaves off a tree branch just few feet away.

A ‘semi-natural’ animal park opened back in 1974 in an area rich in fauna and flora, Sigean does not exist merely for human entertainment, however. Yes, this is a slick ‘leisure’ attraction and the on-site facilities for repose or restauration are excellent, too. But its other manifesto tick-boxes include: research (scientific studies and collaborations); wildlife conservation (of species endangered in their usual African habitats, as part of various European breeding programmes – an estimated 900 mammals, 600 reptiles and 2,000 birds are bred here); and education – kids and adults alike can learn a great deal and will leave imbued with a real sense of the wonders of wildlife and key conservation issues.

My south of France safari is the kick-off point for an exploration with a broad ‘man (woman) and nature’ theme, spanning sections of the Aude and Hérault departments. Next stop: about 40 minutes up the A9 to the edge of Béziers to witness up-close one of France’s most epic engineering feats, which harnessed nature’s force within a stunning, beautifully bucolic setting – the epic Canal du Midi, which was Béziers native Pierre-Paul Riquet’s 240km-long, 17th-century project (originally called Royal Canal in Languedoc before revolutionaries dropped the ‘royal’ part!).

This section of the canal features the emblematic Neuf écluses de Fonseranes, a flight of nine locks (eight oval-shaped lock chambers and nine gates, to be precise) which allows boats to rise 21 metres over a 300-metre stretch. Its idyllic location, with the former stables and lock keeper’s house still remaining, is a thing of beauty – and power too, as I witnessed when a pleasure cruiser made its way up the flight. You can safely watch the water-rush from behind a metal handrail, or even from the excellent Le 9 terraced restaurant alongside the top lock. It’s great for surveying the scene over a languorous lunch (Riquet menu, €24).

Fascinatingly, while Riquet is rightly lauded for his behemoth project (a chap nattily dressed and bewigged as the esteemed engineer wanders around the locks site for photo ops), he actually sub-contracted out parts of the canal’s construction. The Fonseranes locks were built by two illiterate yet highly skilled peasant brothers, Michel and Pierre Medailhes. When they signed the contract to carry out the work, they simply marked their names with an X. Also noteworthy – many peasant women worked on the locks’ construction.

The feat of engineering that is the Fonseranes locks

As well as traditional bike hire for a jolly jaunt along the canal (or hydrogen-powered ones for the especially lazy!), you can also catch the petit train touristique direct into Béziers (and back). But, of course, for the most authentic voyage you need to be at the helm of your very own vessel on the water. The lock HQ serves as a departure port for easy-to-handle (ie. gentle speeds, simple navigation) electric barges – ideal for a pootle along the canal as you enjoy the breathtaking, tranquil beauty of rural southern France at its most romantic. These little boats have sun-shades – vital for high-summer cruising – and since your trip heads off westward, you won’t need to contend with those locks.

Water-based adventures are also abundant at Cap d’Agde, the popular seaside resort about half an hour east of Béziers. As well as beaches and associated watersport fun, including sailing and excellent diving (the volcanic vestiges and basaltic plateaux of the Grandes Tables diving spot south of La Grande Conque beach feature a wide variety of below-surface eye candy), you can also enjoy boat cruises of varying durations, taking in both Cap d’Agde’s interior waterways and the river Hérault into the vielle ville, as well as longer coastal trips to Sète. These depart from Agde’s central port/promenade, a bustling line of boutiques, restaurants and cafés which is also perfect for people watching as you nurse a cold beer or an impressively stacked ice cream.

If you are looking for lunch, La Manade, set back from the promenade in the quiet Place Saint-Clair with a delightful terrace, offers excellent regional specialities.

Looking beyond the bling and buzz, Cap d’Agde has yet more in store for nature lovers and those committed to green tourism. The 600-hectare Bagnas National Nature Reserve comprises wetlands (lagoon and marshes), dunes, coastal heaths, salt meadows and agricultural zones, and is a haven for some 250 species of birds – name-checked are the black stork, heron, flamingo, swallow, avocet and little egret or the less common black-winged stilt, Kentish sandplover, the greater short-toed lark and the Eurasian bittern. They nest, feed or rest here in their thousands during annual migration and twitchers can spot their fancies on foot, by bike or on horseback. 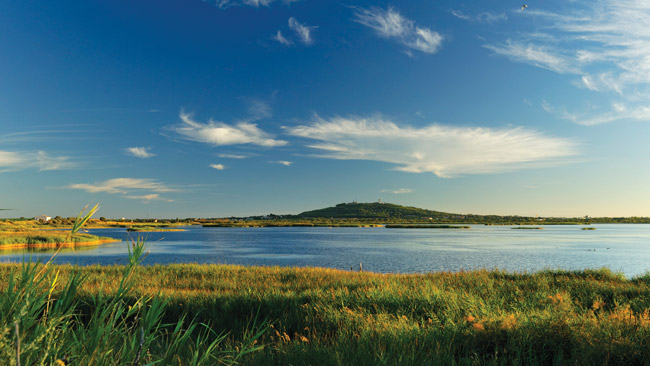 Further down the coast at delightful Sérignan-Plage (around 30km along the D612) feast your eyes on the stunning, wide-screen natural habitat of Les Orpellières. Situated at the mouth of the Orb river, this 170-hectare site – protected under the Natura 2000 label – is made up of a beach, a 2.5km long line of sand dunes and a vast area of salt meadows.

There are various ways to immerse yourself in utter serenity or spot its extensive bio-network – stroll along the hiking trail, take to the water for activities such as sailing, paddleboarding or canoeing, hop on a pony (from June to September) or simply stop to soak up the magic of the place from atop the striking, water- tower-like belvedere at the Maison des Orpellières.

Sérignan’s four fine golden sand beaches run for over 5km in total and all boast a Blue Flag – the label which rewards special efforts in terms of environmental commitment such as combating illegal rubbish dumping, as well as improving accessibility to people with reduced mobility (there are many strict criteria to meet). It’s hard to imagine a better beach to while away the hours, especially for those planning a summer holiday with little ones.

My final stop, just outside Sérignan itself (an attractive, lively little town with a fine market and vibrant cultural scene), epitomises the French passion for making the most of nature’s bounty through dedication and skill. Domaine Lupia is a small olive farm producing top-notch oils and tapenades as well as the most exquisite hand-picked Lucques olives, which raise the bar at any apéro.

Arnaud and Françoise Lupia are the very affable and welcoming couple (tours and tastings, just €3) who took over the family vineyards in 1988. While they still grow grapes to sell to local cooperatives, they wanted to revive the hitherto defunct olive-growing tradition. However, they were unsure if it would work given the coastal climate. “So I went to Italy to investigate and saw olive tress growing on the beach, and I knew it was going to be fine!” says Arnaud.

By 2002 they finally switched part of the domaine’s focus to olives, with indigenous varieties at the forefront (Lucques, Amellau and Picholine). Thus they resuscitated part of Sérignan’s heritage – olive-growing had been a major industry in days of yore, with 250 hectares of olive trees in the region until 1550, then 185ha by 1603, just 46ha by 1776, and finally zero.

The domaine’s winning mix of nature and nurture exemplifies the eco-aware touristic offerings to be enjoyed in this delightful corner of France.

With its guaranteed summer sun and abundance of superb beaches, the former Languedoc-Roussillon’s (now part of the massive Occitanie region) coastline is the ultimate haven for those who enjoy camping.There is space for everyone and well-established campsites that leave you wanting for nothing.

Nestled within a towel’s throw of the splendid beach at Sérignan Plage is the Yelloh! Village campsite, one of the most alluring parks on whole Mediterranean Coast. Packed with superb facilities for holidaymakers of all ages it has lots of very cool pools, an array of restaurants with diverse dining options, kids’ clubs, evening entertainment and much more.

Accommodation comes in the form of super-comfortable, state- of-the-art mobile homes. Al Fresco Holidays offers a seven-night holiday at Yelloh! Village le Sérignan Plage on August 13, 2022 from £1,985.20 based on a family of up to six sharing a three- bedroom Azure mobile home including air conditioning. Book at alfresco-holidays.com/wm021

Fly to Béziers Cap d’Agde airport with Ryanair from London (Stansted and Luton), Bristol, Manchester and Edinburgh as well as Paris Beauvais.

Head to Béziers via the A61 from Toulouse, Carcassonne or Narbonne. It is around seven hours from Paris by car.

There are 10 trains from Paris per day, journey time around four hours.