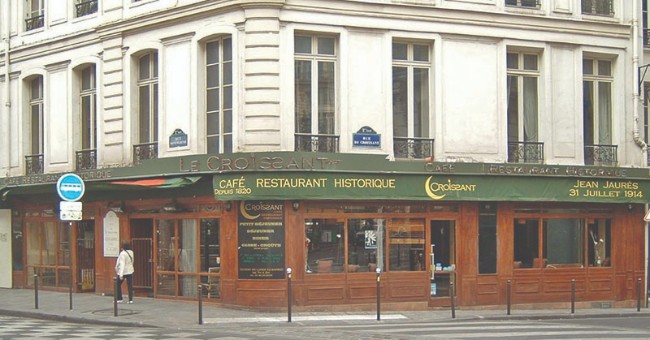 Here is a café where the world changed forever

No, the name doesn’t pay homage to a breakfast pastry– it refers, in fact, to a shop sign that sported a crescent moon, and it hasn’t changed since 1612. But that isn’t why this 2nd arrondissement street is famous.

The 17th-century writers Molière and La Fontaine were both buried here before their cemetery was sold and their tombs moved to Père Lachaise. But that isn’t why rue du Croissant is famous either.

In the 19th century, just before he began publishing La comédie humaine, Balzac frequented the Café du Croissant. But that isn’t it either. Though we are getting close…

The Café du Croissant was where, on July 31, 1914, Jean Jaurès was murdered, an event that effectively propelled France into the First World War.

The French socialist leader and determined anti-militarist was dining here when he was shot dead. He was due to attend a conference a week later to lay out his compelling arguments against an armed conflict. But it was a speech he would never make.

A mosaic on the ground marks the spot where he died, and a plaque on the wall reminds us of the act that changed history. On the café windows are still displayed two front pages of the newspaper L’Humanité, which Jaurès founded, from July 31 and August 1, 1914.

Previous Article Praise be to Cheeses: The Influence of Monastic Orders on French Fromage
Next Article Dining in Paris: Caïus in the 17th arrondissement