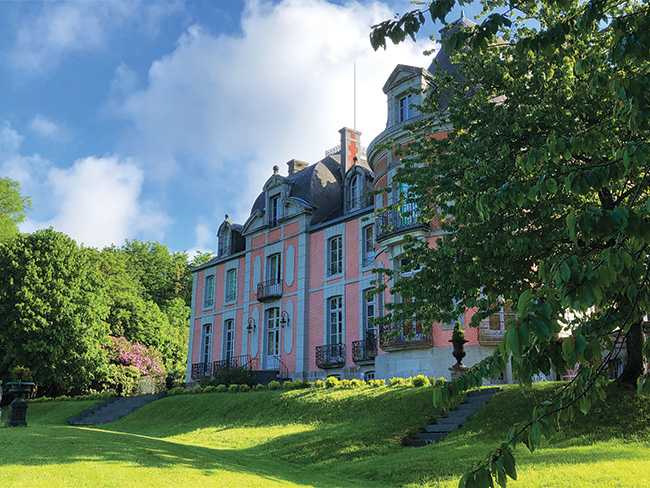 Heading to Normandy? Gillian Thornton rounds up the finest places to stay and eat along the Norman coast from hotels full of character to self-catering apartments. Note: This article is part of a bigger magazine feature called “Travel to Normandy: A Shore Thing”.

Warriors and artists alike have traversed Normandy across the centuries, leaving their marks on the landscape and culture of the region. After a long day discovering the history of the area from the Battle of Azincourt museum to the Remembrance Trail, enjoy a delicious meal in one of the many brilliant restaurants that make the most of the outstanding seafood available. Then, rest your head in peaceful accommodation by the sea, so you are raring to go the next day.

Family-run hotel consisting of two traditional houses close to each other in the town centre, the main house in traditional brick and the smaller one with a charming inner courtyard. Near to beach, shops, restaurants and thalassotherapy/spa centre.
www.hotel-trouville.com

Two former fishermen’s houses on Place Hamelin in the heart of the old town with 14 bedrooms plus a separate house with three guest rooms overlooking the old harbour. Gourmet restaurant and Oyster Bar bistro.
www.hotel-centre-honfleur.com

Cosy rooms at a traditional country inn in the village of Martin-Église, 6km from Dieppe. The restaurant has been awarded a Michelin Plate and serves local produce in a beamed dining room with a large brick fireplace.
www.leclosenormand.fr/en

Three clifftop houses in a quiet clifftop park above Étretat with views of the sea and rock arch. Private house atmosphere with five cosy lounges, 25 individually designed bedrooms, an outdoor pool, and a gourmet restaurant with a Michelin star awarded in 2020.
www.hoteletretat.com

Get away from it all at this clifftop hotel overlooking the tiny harbour of Port Racine at Pointe de la Hague. Nine bedrooms, lounge, and bar with panoramic sea views, plus a breakfast and tearoom.
www.hotel-lerguillere.com

Upbeat seaside décor and gastronomic restaurant at seafront location on Barneville Beach, 1km from the centre of Barneville-Carteret.
www.facebook.com/hotelisles

Situated on Sword Beach close to the Brittany Ferries terminal, local produce from land and sea is served indoors or on a terrace with sweeping sea views. www.lavoileblanche-ouistreham.fr

Close to Omaha Beach and the Maisy Battery, this third-generation catering business began as a take-away food hut in 1967 and is now a popular seafood restaurant run by Maître Restaurateur François since 2014.
www.restaurant-la-trinquette.com

By Ferry: Portsmouth to Cherbourg, Caen-Ouistreham or Le Havre, and from Poole to Cherbourg with Brittany Ferries
Newhaven to Dieppe with DFDS Seaways