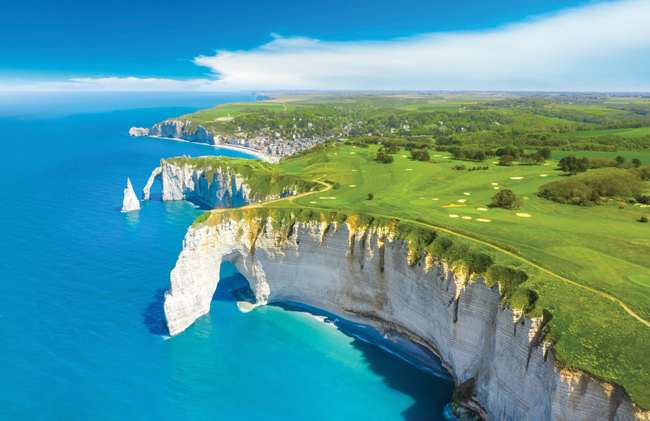 From Le Tréport to the Bay of Mont Saint-Michel, Normandy boasts some of the most varied coastal scenery in France. Gillian Thornton hugs the shoreline for a dramatic coastal road trip.

No matter what sort of seaside ticks your boxes, France can provide it, from the rolling surf of the Atlantic coast to the sun loungers of the Riviera. But no coastal region boasts quite the variety of Normandy, with its broad sandy beaches and sheer cliffs, its rugged headlands and quiet coves that jostle together for 640 scenic kilometres.

For more than 1,000 years, this lush region has been hotly contested by opportunists arriving in boats. The Vikings or ‘Men from the North’ who gave Normandy its name. The English kings of the Middle Ages. And the Allied Troops in the dark days of World War II. Meanwhile, William Duke of Normandy, aka The Conqueror, crossed the water the other way in 1066 to invade England. Follow Normandy’s coastline and you will find reminders of them all.

In times of peace, artists have been drawn to the Norman edge of France by the clear light and endlessly changing seascapes. Holidaymakers come to enjoy the beautiful beaches, outdoor activities and relaxed lifestyle. And because a change of scene is never far away here, the Norman coast is the ideal destination for a seaside road trip, whether you have a long weekend at your disposal or a couple of leisurely weeks in which to explore.

Normandy’s most northerly coastal community is Le Tréport in Seine-Maritime, one of three Norman départéments that face the sea. Leave your car on the quay beside the Bresle river to set off on foot for the fishing harbour and streets lined with old cottages. Then take the funicular up the chalk cliffs for a sandy beach and sheer chalk cliffs of Mers-les-Bains, southernmost resort of the Hauts-de-France region.

Turning your back on the river, the main coast road heads west for Dieppe and Le Havre, but don’t leave the area without making a 5km detour inland to Eu, where William the Conqueror married Matilda of Flanders in 1051. The elegant château was the favourite home of last French king, Louis-Philippe who hosted Queen Victoria and Prince Albert in 1843 for the signing of the first Entente Cordiale.

Back on the road, the busy port of Dieppe offers an eclectic selection of museums from clock-making to local history, contemporary art to the marine environment. For a true taste of the sea, indulge yourself in a steaming fish dish of marmite dieppoise, Dieppe’s answer to Marseille’s bouillabaisse, at the restaurant of the same name.

In the 19th century, Impressionist painters set up their easels here on the Alabaster Coast, named after its towering chalk cliffs. So don’t miss the tiny cliff-top church of Saint-Valéry in nearby Varengeville-sur-Mer, often painted by Claude Monet. Look inside for the stained glass window designed by artist Georges Braque who rests here in the sailors’ cemetery.

The handsome town of Dieppe @ Shutterstock

Two highlights of the Alabaster Coast then follow in quick succession. First Fécamp, with the in-your-face grandeur of its Benedictine Palace, built by local wine merchant Alexandre Le Grand in 1863. An extraordinary combination of museum and art gallery, it honours the secret recipe for Benedictine liqueur rediscovered by Le Grand and only distilled here. Leave time, too, for the excellent Fisheries Museum that tells the story of the town’s key industry.

Nearby Étretat was also showcased by Claude Monet who visited several times in the 1880s. On the promenade, look out for reproductions of his paintings of the town’s famous rock arch and local fishing boats. Then head uphill to explore the magical Étretat Gardens overlooking the beach, particularly famed for their exquisite topiary.

The gardens at Étretat are not to be missed @ Gillian Thornton

My last port of call – literally – in Seine-Maritime is the bustling city of Le Havre, a strategic port which was almost annihilated during World War II. Despite its UNESCO World Heritage Site status, I have to admit that Auguste Perret’s post-war concrete architecture had never been high on my must-see list but I’m very happy to admit that I was wrong. The huge tower of St Joseph’s church with its stained glass panels is a stunner and amongst many other unexpected gems is MuMa, the Museum of Modern Art André Malraux, a trailblazer in design terms and the first major museum built in France after World War II.

Le Havre can rightly claim to be the birthplace of Impressionism, a term coined by an art critic in 1872 in response to a painting of the city’s harbour by Claude Monet entitled ‘Impression, Sunrise’. Today, inside a modern sea-front building flooded with natural light, MuMa houses the second-largest Impressionist collection outside Paris, including a stunning display of work by local seascape specialist Eugène Boudin, mentor to the young Monet.

Cross the mouth of the Seine on the Pont de Normandie and you touch down in Calvados, a département whose shoreline is split by the Orne river, which links Caen to the sea. Barely are you over the bridge when a side turn whisks you to Honfleur with its impossibly picturesque Vieux Bassin, nestled beneath towering façades within sight of the Seine estuary.

Beyond Honfleur, the Côte de Grâce and Côte Fleurie unfold in a succession of holiday resorts that include Trouville, with its beach and busy fishing harbour; stylish Deauville, of racecourse and film festival fame; and family-friendly holiday destinations such as Cabourg and Houlgate.

Honfleur, the inspiration of many an artist @ Gillian Thornton

But just beyond Cabourg, the coast road turns inland at Merville-Franceville where the German gun battery and museum provide a hint of the beaches to follow. On the night of June 6, 1944, Allied parachute troops dropped into flooded marshland here to silence German guns focused on strategic Pegasus Bridge and the Orne Canal, thus kickstarting Operation Overlord – the D-Day landings, or Jour-J to the French.

Drive over the modern version of Pegasus Bridge and you pass the excellent museum to the launch events of that June night, complete with a section of the old bridge and a replica glider – none survived the assault. An hour spent here will set the scene admirably for the remembrance sites to come.

The holiday resort of Trouville @ Shutterstock

Whilst Caen isn’t technically a coastal town, the city is barely 20 minutes by car from Pegasus and a must-see city on any tour of Normandy. Home town of William the Conqueror, who is buried here in the Men’s Abbey, it is also the site of the excellent Caen Memorial, a museum to peace told through conflicts since World War I.

Back on the coast, Ouistreham Riva-Bella at the mouth of the Orne was a low-key holiday resort on the Côte de Nacre until 1944 when it became part of Sword Beach, one of the five D-Day Landing beaches. Beyond it, Juno, Gold and Omaha stretch west along the Calvados coast, with Utah at right angles on the east coast of Manche.

Today, the fine clean sands of the D-Day beaches echo once more to the sounds of happy holidaymakers, but the events of 1944 are never far away. Museums and memorials follow thick and fast, the latest being the British Normandy Memorial at Ver-sur-Mer, behind Gold Beach. Officially opened on June 6, 2021, it carries the names of 22,442 British soldiers who gave their lives in the Battle of Normandy.

The Calvados coast morphs seamlessly into Manche as the coastline veers sharply north towards Cherboug just beyond the hamlet of Isigny-sur-Mer. Walt Disney’s ancestors departed Normandy in 1066, settling first in post-invasion England, where D’Isigny morphed into Disney. One generation later, the family moved to Ireland, before heading to the United States where the rest, folks, is cartoon history.

Collevile-sur-Mer is one of many war cemeteries @ Gillian Thornton

Stock up on sweets for the car journey at Les Caramels d’Isigny before moving from Calvados into Manche as you head north up the east coast of the Cotentin Peninsula towards Cherbourg. After Utah beach, the straight, flat coastline continues through a succession of coastal hamlets before arriving at pretty Saint-Vaast- la-Hougue, which is famous for its oyster beds, fishing fleet, and for Tatihou Island with its maritime museum and botanical gardens.

Then carry on to Barfleur, an important port in the Middle Ages and now one of the Plus Beaux Villages de France. It was here that William of Normandy’s wife, Mathilde, commissioned the ship Mora to carry her husband to England. Later, in 1120, the heir to Henry I of England died here when his ship ran aground at Barfleur Point.

The granite-built town of Barfleur has a history as an important port. Photo: Gillian Thornton

Due west from Barfleur, the modern port of Cherbourg has its own military story to tell at the Musée de la Libération in Fort du Roule. Discover the art collection of the Thomas Henry Art Museum; take a boat trip round La Grande Rade, the world’s second largest artificial harbour; and spend a few hours at the excellent Cité de la Mer, which is dedicated to underwater exploration.

The far north-west of Manche could be another country, dubbed ‘La Petite Irlande’ for its rugged coastal scenery. If you’ve enjoyed the Impressionist links with the chalk cliffs of Seine-Maritime and Boudin’s beaches of the Côte Fleurie, stop off at the village of Gréville-Hague to visit the birthplace of artist Jean-François Millet. One of the founders of the Barbizon school and noted for his paintings of peasant farmers, he also painted the craggy cliffs and sleepy villages of his native coastline.

Wide bays and sand dunes line the west coast of the Cotentin Peninsula, the largest resorts being Barneville-Carteret and Agon-Coutainville. I’ve always had a soft spot for the historic port of Granville with its atmospheric Haute Ville perched on a strategic promontory. Take a pleasure cruise beyond the headland for distant views of Mont Saint-Michel, Normandy’s most famous historic monument.

To reach the Mount by road, you pass through the hilltop town of Avranches, home to a fascinating exhibition of illuminated manuscripts created by monks from the Abbey of Saint-Michel. In 1172, Henry II received absolution in St Andrew’s Cathedral at Granville for the murder of Thomas Becket. The church is long gone, but you can sit here in Thomas Becket Square, a quiet park with distant views of the Mount, on the very spot where it happened. No coastal tour of Normandy is complete without a closer look at the Mount, which lies just within Norman waters.

Explore the winding uphill street to the abbey church, enjoy a guided bay walk, or simply admire it from a viewpoint along the coast. There can be few more dramatic conclusions to any seaside road trip.

Lead photo credit : Étretat is just one of many gems tucked away on Normandy's magnificent coastline @ Shutterstock