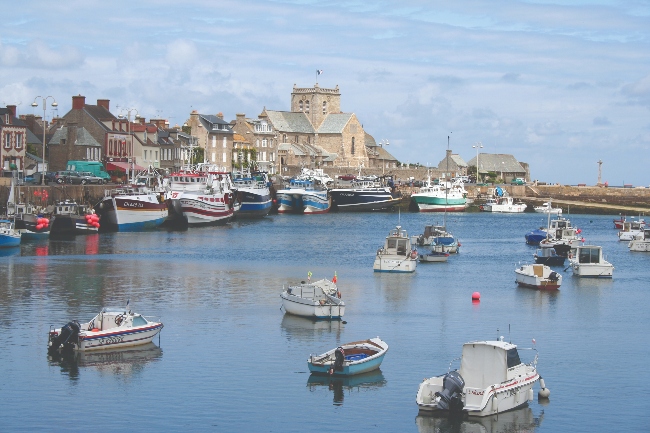 Planning on a trip to Normandy? Here’s our pick of the finest towns and villages along the Norman coast from Honfleur to Cherbourg. Note: This article is part of a bigger magazine feature called “Travel to Normandy: A Shore Thing“.


The Norman coast, and the region of Normandy more generally, has seen much turmoil over the centuries. The Northmen (also known as Vikings) invaded in 876 with Rollo, their leader, taking Rouen to become Duke of Normandy. Rollo’s descendant William the Conqueror then invaded England in 1066. More recently, Normandy was the site of intense fighting in the Second World War as Allied forces landed across five beaches on D-Day in the largest seaborne invasion ever. The Remembrance Trail provides an excellent opportunity to learn more about the complexities of Operation Neptune with museums and monuments across all the D-Day Landing beaches.

Normandy is now also known for its stunning seaside towns and resorts, like Deauville, which provide some respite from the hustle and bustle of everyday life. Sit at a cafe by the harbour in Honfleur and savour some crêpes, visit the cathedral at Caen where William the Conqueror is buried or stroll around the beautiful gardens in Étretat. This article explores Normandy’s seaside towns that simply can’t be missed.

Home to France’s shortest river, this fishing and weaving village was a favourite with Victor Hugo for its half-timbered houses, waterside walks, and streets lined with summer roses. Classified amongst Les Plus Beaux Villages de France.

Enjoy paintings of the Norman coast at the Eugène Boudin Museum and go on a surreal journey through Maisons Satie, birthplace of composer Erik Satie. Enjoy estuary views from the Jardin Retrouvé and from Mont-Joli 1.5km from the town centre.

The view over the harbour to Saint-Nicolas church is postcard-perfect. Be sure to see the listed stained glass windows in Chapelle de la Bretonne; the opulent 15th-century houses of Cour Sainte-Catherine; and the humble fishermen’s cottages.

A fishing port, seaside resort, and pilgrimage site surrounded by Normandy’s tallest cliffs, its medieval abbey church of Sainte-Trinité is longer than Notre-Dame in Paris. Visit the fisheries museum, ducal palace and that famous Benedictine distillery.

The port of Deauville © Fabio Tura

This stylish seaside resort was created from reclaimed marshland in the 1860s. It has grand half-timbered hotels and a stylish racecourse and is home to the American Film Festival. Walk the boardwalk, relax on the beach or spend a day at the races.

The last stop in Continental Europe for the Titanic, the Art Deco transatlantic liner terminal is now a showcase for underwater exploration and includes Le Redoutable submarine, as well as a Titanic exhibition, and multiple aquariums.

This fishing town was popular for sea bathing with wealthy visitors from the 1840s. Discover the history at the Heritage Museum on the cliff, take a boat trip or try paddle boarding beneath the cliffs and explore the innovative Gardens of Étretat.

Steeped in history as far back as the Norman Conquest of England, visit William the Conqueror’s ducal castle, stroll through the picturesque old quarter and discover the story of the Liberation in the cloister of the Abbaye aux Hommes.

An important cod-fishing port from 1450, Granville was a town of corsairs – or privateers – licensed under Louis XIV. Today, it is France’s premier shell fishing harbour, but also popular for its historic Upper Town, and the nearby Dior house.

Step back to the 1950s at the Auguste Perret show flat, see the city from the 17th floor of the Town Hall, visit the cathedral and tour the artworks at
MuMa. Enjoy the 2km beach or take a swim in the eye-catching Bains des Docks aquatics centre.

The harbour at Arromanches-les-Bains became known as Port Winston during the Second World War when it received 2.5 million men, 500,000 vehicles and four million tonnes of supplies over five months during and following the D-Day Landings © Joris Berthelot

History comes movingly to life as you tour the memorials, cemeteries and wide open beaches associated with June 1944. Each one has its own unique story to tell so make a personal choice with help from the Normandy Tourism website.

Mont Saint-Michel has been a place of sanctuary, a fortress, and a prison. Still a place of pilgrimage, it is also one of France’s most popular visitor sites.
Time your visit to avoid crowds on the winding narrow street, but do go. Explore the bay too.

Previous Article Competition Ended: Win a Provence Stay with Evancy
Next Article 11 Places to Stay on the Provence Wine Route