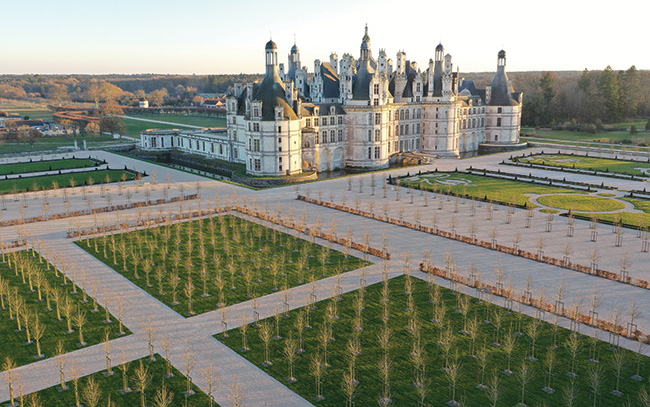 Step back in time and enjoy some of France’s greatest architecture. From the riverside beauties of the Loire Valley to the fairy-tale castles of Alsace and the hilltop forts of the southwest, there are hundreds of châteaux to visit across France, offering an intriguing glimpse into the life, culture and decadence before the French Revolution.

The first part of the guide looks at the best French châteaux to visit. Indulge your love of architecture and interiors as you wander in awe around these beautiful châteaux. And be sure to do your best impression of a French aristocrat.

Architecture from the 13th to the 17th centuries is on display at this fine château in the Loire Valley. There are four distinct wings surrounding a central courtyard: medieval, Gothic (from the reign of Louis XII), early Renaissance, and classical 17th century. Steeped in history, the château has witnessed some pretty grisly episodes. The grisliest of all was in the 16th century when Henry III lured the Duke of Guise into his counsel chamber only to have him stabbed to death by a troop of royal bodyguards. The king himself hid behind a tapestry while the evil deed was carried out. Between April and November, dramatic sound and light shows are put on in the château courtyard.
https://www.bloischambord.co.uk/explore/the-chateaux/the-royal-chateau-de-blois

First built in the late 14th century by Louis of Orléans, this awe-inspiring castle lay in ruins for much of its existence until Napoleon III commissioned the famous architect Eugène Viollet-le-Duc to restore it to its medieval glory. The result is a vast eight-towered château straight out of a fairy tale, complete with drawbridge, gargoyles and dungeon, all surrounded by the thick Compiègne Forest.
www.chateau-pierrefonds.fr/en

Sitting atop a rocky outcrop on the southern bank of the Loire, the Château d’Amboise comes alive when you learn of the famous historical characters who once lived (and died) here. In the late 1400s, Charles VIII met his end here while on his way to watch a game of real tennis. After bumping his head on a door lintel he fell into a coma and died hours later. More violent was the fate of a band of Protestant conspirators who, in the 1500s, were disembowelled and hanged from the balcony of the château’s Salle des États. Mary, Queen of Scots once lived here too, as did Leonardo da Vinci, whose remains are believed to be buried in the nearby chapel of Saint Hubert.
www.chateau-amboise.com

It was just over 500 years ago, in 1519, that the first stone was laid at Chambord. Completed during the reign of Louis XIV, the château is now one of the most recognisable examples of Renaissance architecture in France.

Sitting on roughly 13,000 acres of land, and featuring more than 400 rooms, it requires a full day’s visit to give it justice. And if the sumptuous interiors don’t make your head spin then the famed double-helix staircase (believed to be the work of Leonardo da Vinci, who lived nearby) certainly will. “Without doubt Chambord’s greatest innovation,” is how it’s described. It leads to a glorious rooftop terrace adorned with domes, towers, cupolas, chimneys and mosaic roofs. There are plenty of cultural events planned this summer including light and pyrotechnics shows, concerts (Sting is playing on June 28), and medieval-themed activities.
www.chambord.org

Perched on a forested promontory in the Vosges mountains and constructed from bright red sandstone, this Alsatian château stands out for miles around. Although no one is sure when it was built, it’s certain the vast structure was an important outpost during the Middle Ages. By the 1600s it had been abandoned and wasn’t rebuilt until the German Kaiser Wilhelm II took an interest at the beginning of the 20th century.

Over the years, many film directors have been inspired by the castle, including Jean Renoir (for La Grande Illusion) and Peter Jackson (for The Lord of the Rings). Today it is a major tourist attraction, open all year round, and drawing in half a million visitors a year.
www.haut-koenigsbourg.fr/en

Beneath this Loire Valley château is a labyrinthine complex of underground tunnels, cellars and caverns. “A whole château beneath a château,” is how the owners describe it. “The fortress of Brézé is a voyage into the bowels of the Earth and through time to a history long forgotten.” Visitors can take a subterranean tour, admiring the fine wines stored deep down. Back at ground level there are alluring medieval elements such as drawbridges and dry moats. www.chateaudebreze.com

One of Europe’s largest châteaux, Fougères has been around in one form or another for a thousand years or so. Naturally protected by a marsh and the River Nançon, it features a dozen impressive towers, as well as inner courtyards and gardens, all encircled by ramparts. Perfect for holding out when under siege by the invading English. For visitors, this Breton château offers an intriguing glimpse into what life was really like in the Middle Ages. Open most of the year, except for January.
https://chateau-fougeres.com/en/home/

Standing sentry high above the valley, surrounded by jutting cliffs and forests, this brooding fortress in the Jura Mountains looks like a backdrop from The Lord of the Rings. A century in the making, it was built to defend important trade routes through the valley, although it wasn’t always a stronghold. During the 18th and 19th centuries it served as a bleak state prison, its most famous inhabitant the Haitian revolutionary Toussaint Louverture, who met his end behind bars here.
www.chateaudejoux.com

There are no fewer than 1,500 rooms in this opulent château, just 34 miles from Paris, most of them adorned with beautiful paintings, tapestries, frescoes, carvings, fireplaces and furniture. At one time even Leonardo da Vinci’s Mona Lisa hung here. The human residents who have called it home over the centuries are even more impressive, including kings, queens, emperors, and World War II generals. Beyond the château walls the 130 hectares of parkland and gardens – partly designed by André Le Nôtre – are suitably resplendent. Open all year round.
www.chateaudefontainebleau.fr/en

The Château de Guédelon in the Yonne department is a fascinating experiment in 13th-century building techniques © www.guedelon.fr

This medieval fortress sits in a tranquil corner of northern Brittany. As with most castles built in the Middle Ages, it was created to defend – in this case, the eastern border of the Penthièvre territory. Sadly, the château was reduced to rubble in a civil war, before a heroic revival in the late 1300s, which saw the introduction of its trademark circular towers. Eventually, at the tail end of the 15th century, it became a symbol of the Tournemine family’s new-found power and status, cementing itself as a prestigious regional landmark.
www.la-hunaudaye.com

“Through the trees in the distance, I see the tortuous course of the Indre, and an ancient château, flanked by towers,” wrote the playwright Pierre Beaumarchais in 1769 of this château which overlooks the River Indre. Indeed, the first thing you’ll notice is the castle’s captivating beauty: the glowing white limestone, the flower-bedecked walkways, and reflections dancing on the surface of the moat. But there’s more than meets the eye in this leafy Loire Valley oasis, as it also once hosted legendary sculptors Camille Claudel and Auguste Rodin, who conducted their tempestuous love affair here in the late 1800s. Open every day from May 1 to September 30, and all year round for groups with reservations.
www.chateaudelislette.fr/en

Built around 1590, for Nicolas Rapin, High Provost of the Constables of France, this Renaissance château was owned in the 19th century by the Marquis Octave de Rochebrune, who was celebrated for his etchings. In fact he produced just shy of 500 of them while living at Terre Neuve. His artistic flair must have been catching since, during the Second World War, the famous French author Georges Simenon lived here, penning several works. The château also reveals superb examples of sculpted stone panelled ceilings and monumental fireplaces. The château is open from April 9 to November 6, but with varying hours, so check on the website for details.
https://chateau-terreneuve.com/en/welcome

This château is entirely different from all the others featured here in that it hasn’t actually been built yet. Deep in a Burgundy forest, just over 100 miles south of Paris, it’s an architectural and archaeological experiment in which the builders are constructing a genuine 13th-century castle using only medieval tools and methods. No modern cranes or lorries or electric tools on this building site.

As far as possible, all the craftsmen and women here both work and look exactly as their ancestors would have 800 years ago. Dressed in woollen smocks, there are quarrymen hewing rocks out of the ground; stonemasons tapping away with their chisels; carpenters hand-sawing trees cut from the local forest by lumberjacks; blacksmiths forging the iron tools; tilers digging clay from the ground nearby and firing it in ovens; and carthorses transporting all these materials around the site.

The whole project aims to rediscover the secrets of medieval architecture and to teach modern builders how to work with traditional tools and materials. Visitors are encouraged to engage with the builders while they toil away, rather like an interactive theme park. Construction on Guédelon started in 1998 and isn’t due to finish until 2030 at the earliest. This year it’s open to the public from April 2 to November 6.
www.guedelon.fr