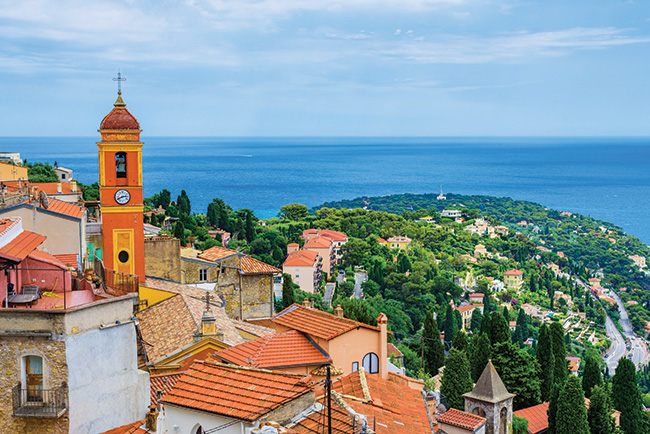 Some things never seem to change. On the rocky coastal footpath that winds around Cap-Martin, facing west toward Monaco, there’s a magical spot with a little stone bench. The view is glorious – a tangle of exotic vegetation and windswept pines and beyond, a sparkling stretch of blue sea. You may catch a whiff of rosemary and thyme, growing wild between the sun-warmed rocks. There is not a single crane, yacht or high-rise anywhere in sight.

It was here, back in the 1880s, that Claude Monet trudged down the dusty yellow trail with his easel to paint the mauve-purple cliffs of Monaco. Having already painted the shores of Bordighera and Antibes, this Cap-Martin vista offered a perfect perspective of “broad mountain lines”, deemed by the artist as “the most beautiful spot on the entire coast”. No wonder Monet was feverishly exuberant but also terrified by the chaotically lush Riviera landscape.

“These damn palm trees are driving me crazy,” he wrote to his mistress, Alice Hoschedé. “When surrounded by such dazzling light, one finds one’s palette rather poor. Here art would need tones of gold and diamonds.”

But of course, Monet was not the only one to be seduced by this lush finger of land and its surrounding heights, wedged between Menton and the Principality of Monaco. Today, the town of Roquebrune-Cap-Martin, which extends from the coast to 225 metres above the sea, stands out as a remarkable landmark destination.

It boasts a treasure trove of diverse architecture within a 9.33km2 radius, with everything from a 10th-century medieval dungeon (reputedly the oldest feudal castle in France) to lavish Belle-Époque villas and ornate winter palaces, designed by renowned Danish architect Hans-Georg Tersling. Once the holiday headquarters for high society and European royalty, little did anyone dream that Roquebrune-Cap-Martin would also become a hotbed of avant-garde architecture and an idyllic retreat for a number of celebrated writers, artists, photographers and designers.

Call it a quiet revolution. By the mid-1920s, a new era in Modernist minimalism was underway on a hidden terraced plot of land in Cap-Martin with the discreet arrival of Irish designer Eileen Gray, the star of the Parisian Art Deco scene. Dreamed up as a holiday home for her lover, Jean Badovici, a Paris-based Romanian architect and editor, Gray designed Villa E-1027 to be a versatile, multi-functional romantic hideaway. The white concrete, flat-roofed, rectangular villa facing the Mediterranean was a fusion of their names – E for Eileen, 10 for the letter J, the 10th letter of the alphabet, 2 for the B in Badovici, and 7 for the G in Gray. New constructs abounded: a transformable open-plan living space, indoor-outdoor kitchen and Gray’s emblematic modular furniture – squishy Michelin-tyre-inspired Bibendum chairs, an adjustable glass-top telescopic table (that extends over a mattress to catch breakfast-in-bed crumbs), pivoting drawers and mirrors, and a cork-topped table that silenced the clinking of cutlery. Whimsical phrases (Enter Slowly, Laughter Forbidden) were stencilled on the walls; a sunken black-tiled ‘sun pool’ (filled with sand) in the garden was meant for cocktails and conversation.

In 1952 (by which time Gray had already split up with Badovici and moved to nearby Castellar to build another home), Le Corbusier decided to set up house just yards from Gray’s villa, with a beach hut – a 3,66m2 cabin with only a bed, sink, table and desk, plus a tiny garden shack. Added to this exceptional chunk of property was the architect’s prototype Unités de Camping and frescoed L’Étoile de Mer, a tiny terrace café adjacent to his cabanon. Now, after decades of administrative battles, the meticulous €5m renovation of this once-abandoned shell (one of France’s most seriously decayed historic monuments) is finally complete and open to guided visits that include the entire Cap Moderne site. Expect to view Villa E-1027 as Eileen Gray designed it, with stunning one-off replicas, perfect right down to the most infinitesimal detail.

The Great and the Good

In 1929, the same year that Gray completed her seaside E-1027, Gabrielle Chanel splashed out 1.8m francs for a sprawling clifftop property at Roquebrune (on land previously owned by the Grimaldi family) and another style of love nest: the Robert Streitz-designed Villa Pausa, inspired by the Cistercian convent orphanage where she was raised. Here, she and her lover, the Duke of Westminster, entertained the likes of Jean Cocteau, Pablo Picasso, Pierre Bonnard, Igor Stravinsky, Salvador Dalí and Luchino Visconti, among other glitterati. Winston Churchill spent a great deal of time at Chanel’s guest cottage, painting and writing portions of his book, A History of the English-Speaking Peoples. While the Duke’s bedroom was sober, Chanel luxuriated in a boudoir with a pink canopy, 16th-century oak furniture, mirrors and wrought-iron chandeliers. But elaborate it was not – it was furnished in what the designer called “a new modern style” that was relaxed and informal, with architectural touches that reminded her of the former abbey of her unhappy adolescence. Set back in a landscaped park lined with olive, orange and mimosa trees and sweeping vistas of the coast, the seven-bedroom villa was centred around a cloister and featured a monumental staircase that was an exact replica of the one at the 12th-century convent.

After the death of the Duke in 1954, Chanel sold the house to American writer and publisher Emery Reves and his wife, Wendy, who entertained an enclave of friends that included Greta Garbo, Grace Kelly, Noel Coward and Jackie Onassis. Abandoned between 2007 and 2015, the Chanel fashion house purchased the property seven years ago (for private use only), reviving the spirit of Gabrielle Chanel’s beloved dream house. You can still see some of Villa Pausa’s art collection and original furniture today at the Dallas Art Museum.

On a neighbouring terraced hillside in Roquebrune stood the pink Provençal-style Villa La Souco (now privately owned), home to French painter Simon Bussy and his British wife, Dorothy Strachey and their artistic enclave. During the 1930s and 1940s, the couple invited a constant stream of guests among their illustrious circle of friends for long stays – Roger Fry, Vita Sackville-West, Lytton Strachey and Virginia Woolf from the Bloomsbury Circle, as well as French writers André Gide and André Malraux, who installed his mistress and young child in one of the rooms in 1941.

Life at La Souco was somewhat akin to a tranquil writers’ retreat, with long after-dinner discussions held in the garden under the orange trees. Only Virginia Woolf was unimpressed, bored, she declared, by the “perfumed villas” set on the cliff like eggs in a row, lamenting in her diary that there was nothing to do but contemplate the sea and rooftops of the Monte-Carlo Casino.

No one should leave Roquebrune without a visit to the medieval village, carved into the rock above the Grande Corniche, a labyrinth of ancient pink brick houses, winding cobblestone stairways and vaulted archways. Behind the closed doors are storied houses, beginning with l’Aumônerie (The Alms House), once the home of American fashion photographer Henry Clarke, who often invited Princess Grace to dine in his elaborate, beautifully-tended garden. The highlight is the castle, the sole example of the Carolingian style, albeit modified to suit the fairytale tastes of wealthy Englishman Sir William Ingram, who decided to buy the castle in 1911 and add another tower.

A short drive away on the Grande Corniche is the newly-opened hotel, The Maybourne Riviera, the latest French addition to the Maybourne Group (Claridge’s, The Connaught and The Berkeley in London, and The Maybourne Beverly Hills). The ultra-contemporary 69-room hotel sits atop a cliff at the easternmost border with Italy, a dazzling block of white cement and floor-to-ceiling glass designed in the spirit of the Modernist pioneers Eileen Gray and Le Corbusier, who, incidentally, is buried in Roquebrune’s cemetery.

It has five restaurants, including Ceto, a rooftop gastronomic dining spot offering exceptional seafood which is headed by Michelin three-star chef Mauro Colagreco, who also oversees the informal Mediterranean-style Riviera Restaurant, and a restaurant helmed by global super-chef Jean-Georges Vongerichten. From the plunging panorama of the dining terrace, as hang-gliders swoop by, chances are you’ll recognise the sharp white angles of Gray’s experimental Villa E-1027, nestled in the greenery of the Cap-Martin below. One can’t help wishing that the town’s former famed residents were still around to celebrate Roquebrune’s spectacular revival.

Lead photo credit : Roquebrune and the Mediterranean coastline have inspired artists, writers and architects, amongst others © Shutterstock