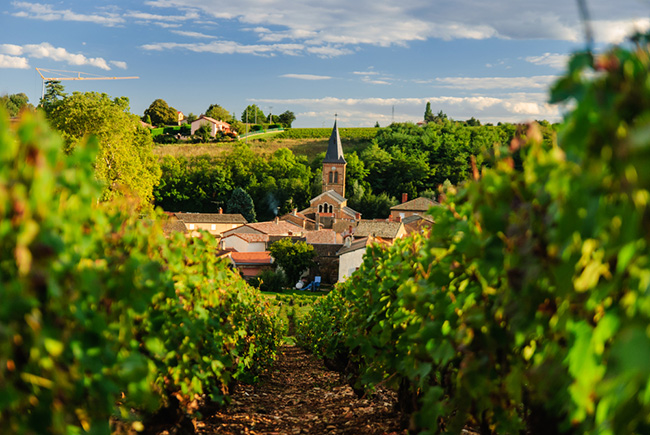 Le Beaujolais nouveau est arrivé! Although typically a bigger event in France, the San Francisco Bay Area is celebrating the annual arrival of Beaujolais Nouveau (BoJo) wine on the third Thursday in November. That’s officially 17 November this year. Celebrations include parties and special discussions by local Alliance Française groups, themed dinners at restaurants plus wine distributors who hope to offer the wine for sale on the appointed day for individual celebrations.

But one of the fun things about Beaujolais Nouveau is the conversation about the celebration versus the quality of the wine.

“Beaujolais Nouveau is not about the wine but about the celebration, having a good time with friends to celebrate Fall,” said Eric Senesi, who calls himself a Frenchman and wine lover who settled in Los Altos, CA, 20 years ago. His French wife, Isabelle, added, “Remember, there is no Thanksgiving or Halloween in France.”

Jean-Pierre Cauvin, who lives in Saint-Germain-en-Laye, France, agrees about the celebration angle. “We celebrate this event only at a party with friends, but some friends celebrate it every year. This wine is a very young and light primeur (early wine), sometimes not of impeccable quality, but it’s a good opportunity (and a pretext) to meet up with friends rather than celebrate a wine of extraordinary taste.”

The tradition of Beaujolais Nouveau has a long history in the Beaujolais region where it started as a celebration of another successful Gamay grape harvest. The region is north of Lyon and part of the Burgundy area. Since the early 19th century, the first wines of the vendange were sent down the Saône river (sometimes in floating barrels) to the bistros of Lyon as part of the French tradition of vin de primeur, or early wines, released the same year as the harvest. Of course, the wine was also distributed throughout the region for people to enjoy.

In 1985, the Institut National des Appellations d’Origine established the third Thursday of November as a uniform release date and the party started when marketing from wine merchants to sell the wine worldwide created a “Nouveau craze.” Thus started the ups and downs of Beaujolais Nouveau’s quality and reputation. Ultimately, better terroir-driven Beaujolais appellation wines such as Beaujolais-Villages, Fleurie, Brouilly, Morgon and others emerged and the reputation for Beaujolais Nouveau settled as a light, primeur wine supporting a long history of the region.

Although Eric Sensi prefers the higher quality Beaujolais, he has enjoyed the nouveau. “When I was a student in French university, we drank a lot of Beaujolais because it was the cheapest, kind of equivalent to ‘Two Buck Chuck’, he said. “For four or five years in September, I did participate in “the vendanges” (harvests) in one farm in Beaujolais Village. Mostly it was for the money and the fun and some binging.”

Upi Struzak, President of Alliance Française Silicon Valley (AFSV) and Vice President of the Federation of Alliance Françaises USA believes the celebration is a good strategy for the region. “Beaujolais Nouveau is also a way to promote the other wines of the region,” she said. “I enjoy the Beaujolais white wines that are very good, so Beaujolais Nouveau is a way to show off the rest of the wines.”

Find out more about Beaujolais this week © Shutterstock

The San Francisco Bay Area will have several places that will celebrate Beaujolais Nouveau. If you want to drink the wine and practice your French, the Alliance Française in the area are hosting events.

The AFSV will be celebrating Beaujolais Nouveau for the first time in eight years and it will be a fundraising benefit. Each ticket holder will receive a free glass of Beaujolais Nouveau and additional Beaujolais wines will be available for purchase by the glass or bottle, plus access to a French charcuterie and cheese buffet. French will be spoken, bien sûr. If attendees want to contribute more to AFSV, a donation box will be available. Tickets are $45 for AFSV members and $60 for non-members. Location is AFSC, 14107 Winchester Blvd., Suite T, Los Gatos, CA.

“We need to celebrate on the weekend, not on Thursday, because that is a working day,” said Struzak. “It also comes just before Thanksgiving in the US and Beaujolais Nouveau wines go well with turkey dinner. At least I’ve heard this many times.”

Enjoy Beaujolais and Beaujolais Nouveau wines while speaking to other French learners (and experts.) In fact, all levels and languages are welcome as the Language Exchange goal is to practice languages and meet new people who want to do the same. Attendance requires signing up as it’s a reduced capacity event to keep attendees Covid safe and masks are required when not sipping wine, but it’s free. Location is Bissap Baobab, 2243 Mission Street, San Francisco, CA.

“It’s true that the Beaujolais Nouveau wine is not the best in terms of quality or taste but that never stopped me from celebrating,” said Louise, Communications and Marketing at AF San Francisco. “I come from Burgundy, from Saône-et-Loire, a region where the wine culture is very important, and my family is very attached to this tradition.”

Village of Morgon in the Rhône department © Shutterstock

Another place to practice your French vocabulary for describing how Beaujolais Nouveau tastes is AFB’s potluck where discussions will centre on aromas and tastes of different vintages. Bring a potluck dish to share – le potluck est arrivé aussi. Location is AFB, 2004 Woolsey Street, Berkeley, CA.

Speak French while enjoying a free glass of Beaujolais Nouveau and an apéro. Extra glasses cost $5 each and premium wines are available for purchase too. This is also a fundraising event with a silent auction that includes wines, art, hotel rooms, and special foods, along with tickets to the Sacramento French Film Festival. Tickets are $50 for AFS members and $55 for non-members. Location is Clara Auditorium, 2420 N Street, Sacramento, CA.

“We all know the Beaujolais Nouveau is not a fancy wine,” said Frédérique Lamort, Executive Director, AF Sacramento. “The only expectation we have celebrating the Beaujolais is to have a great night out with friends.”

A variety of restaurants will be offering Beaujolais Nouveau dinners throughout the Bay Area. One of the most popular is the Left Bank with three locations in Larkspur, Menlo Park and San Jose. The dinners are specially created for the occasion and include duck sausage, beef bourguignon and beef marinated in Beaujolais wine.

If you prefer to hold your own celebration with family and friends, Jean-Pierre and Sylvie Cauvin (of French cheese and wine dinner fame) offer suggestions for a simple aperitif. “To accompany Beaujolais Nouveau, try a cheese platter with Comté, Cantel, Beaufort, Camembert and Brillat-Severin,” said Jean-Pierre. Sylvie added, “For meat lovers, the wine is best with a white meat and/or charcuterie.”

To celebrate the Beaujolais Nouveau wine day, have fun meeting friends now that we can get together and drink a few glasses of BoJo. Then, move to the good wine if you want. Just enjoy.

Lead photo credit : Vineyard and the town of Saint Julien in Beaujolais © Shutterstock