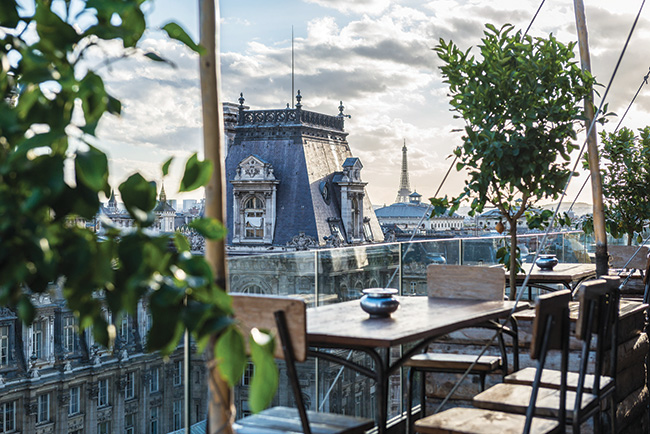 Though an integral part of the cityscape, Paris’s distinctive zinc rooftops have become almost invisible, but as much as we take them for granted, there is nothing in the world quite like them. Jennifer Ladonne discovers some of the best places in the capital to appreciate them anew.

Shining like molten silver in the limpid sunlight or blending seamlessly with a low overcast sky, Paris’s rooftops are no small part of its beauty and character. Baron Haussmann, in his massive renewal of the city in the 1850s and 60s, topped nearly two thirds of its structures with the malleable, lightweight metal, adding an airy lightness to its buildings and skyline. So iconic are these zinc roofs – and so rarefied the expertise used to create them – that they are a candidate for UNESCO’s intangible cultural heritage list.

And while there’s nothing quite like seeing this vast silvery patchwork from the height of the Eiffel Tower or Butte Montmartre, Parisians love nothing more than to idle among the rooftops, perched on a terrace or balcony to watch the sunset turn them from shimmering bronze to midnight blue.

Since only a lucky few of us have access to a Paris apartment or a balcony with a view, here’s our guide to the city’s best public places for seeing its iconic rooftops up close and personal. From museum terraces to rooftop cocktail bars and restaurants, the hallowed heights of Paris are all yours to enjoy.

Up its 206 steps, with passages and panoramas along the way, Paris’s Panthéon culminates in spectacular panoramic views of the city’s cherished monuments, bridges and neighbourhoods: Notre-Dame and the Île de la Cité, Île Saint-Louis, the Arènes de Lutèce, along with Sacré-Coeur and the Eiffel Tower in the distance. A few blocks away, on the ninth floor of the Institut du Monde Arabe – devoted to the culture, art and history of the Arab world – stopping by for lunch, dinner or a snack will afford you some of the city’s most spectacular views of the Seine, Notre-Dame and the Butte Montmartre beyond.

From several points in the interior galleries or exterior terraces of the Musée d’Orsay, on the Left Bank, you can see both banks of the Seine, the Eiffel Tower and the Tuileries Gardens with neat rows of Haussmannian buildings lining the Rue de Rivoli beyond, all the way to the glittering domes of Sacré-Coeur. Many visitors go just for an Instagram-worthy glimpse of Paris through the iconic clock face of the former Gare d’Orsay.

A panoramic terrace at the zenith of the Musée Quai Branly, devoted to the indigenous art and culture of Africa, Asia, Oceania and the Americas, offers great views of the Seine, the Eiffel Tower and much more. Better still, from the museum’s all-glass restaurant, Les Ombres, diners can enjoy close-up views of the tower while sipping a glass of wine or tucking into a gastronomic meal. Halle aux Grains, the stylish restaurant atop the new Bourse de Commerce-Pinault Collection, offers rare eastern views over Les Halles’ undulating canopy to the Centre Pompidou, whose escalators, in turn, offer legendary views as Paris’s rooftops come progressively into view on the ascent. It’s well worth stopping in for a drink on the terrace of the museum’s Georges restaurant for some truly breathtaking views. Now is a good time to go, too, since the museum will close in late 2023 for a massive four-year renovation.

A classical-style loggia and colonnade spanning the length of the magnificent new Hôtel de la Marine – an unparalleled restoration of a noble 17th-century interior which opened last year – gives splendid views over Place de la Concorde, the Tuileries and the Assemblée Nationale beyond. Visit the ballroom first for a marvellous history of the legendary square (where Marie Antoinette and other nobles were guillotined) on a dedicated screen. Superlative views of the Eiffel Tower can be had at the Cité de l’Architecture et du Patrimoine’s newly opened terrace restaurant, and sleek cocktail bar Girafe, at Trocadéro, just across the Seine from the Iron Lady.

At restaurant and bar Le Balcon, on the sixth floor of Jean Nouvel’s glittering Philharmonie de Paris, concert-goers (or anyone) can grab a meal or a drink with panoramic views of Paris and the Parc de la Villette before, during or after a concert. Though the food is hit or miss, it’s a great spot for a drink and a snack.

At Le Louxor cinema, built in 1920 as a stellar example of Paris’s neo-Egyptian craze and reopened in 2013 after four years of restoration, you’ll be immersed in a vibrant neighbourhood while enjoying a snack or drink on its balcony overlooking the Boulevard Magenta, the historic raised Barbès-Rochechouart metro station and the colourful hustle and bustle of Pigalle.

Shopping with a View

Historic Galeries Lafayette’s rooftop terrace is so big that in 1919 aviator Jules Védrines landed his plane there. Nowadays, the eighth-floor terrace offers one of the best panoramas of Paris, with only a waist-high glass panel dividing you from the Haussmannian rooftops, the golden statue of l’Harmonie topping nearby Opéra Garnier and a panorama of pretty much every monument in the city. Its sprawling outdoor terrace with chic rooftop café is an excellent spot for some time out from shopping or to sit and dream. The terrace is open year-round, although its various dining options are open only in warmer weather. At BHV, the Marais’ only department store, you can join the hipsters at one of Paris’s six iterations of Le Perchoir, a trendy bar, restaurant and nightspot with elegant but pricey cocktails and a small selection of moreish but pricey snacks.

Golden L’Harmonie atop the Palais Garnier, as seen from Galeries Lafayette © MOMA Group

More and more Paris hotels are using their rooftops to attract both visitors and locals since you don’t have to be a guest to indulge in their ambience. Many are open only in warm weather, but a few with indoor restaurants or enclosed areas stay open year-round. While this list is far from exhaustive, you can’t go wrong at any of these (hint: go early, terraces always fill up quickly).

The Kimpton boutique hotel chain’s super chic new Paris outpost is a standout not only for its sleek, art-filled rooms but for its splendid rooftop café and cocktail bar with outstanding views of the Opéra Garnier and Haussmannian-era Paris. Though open until October, the hotel is planning new concepts for colder weather. For romance, you can’t beat the Hôtel National des Arts et Métiers’ intimate open-air cocktail bar. Nestled among the rooftops in a corner of the Haut Marais with views of a spooky medieval Gothic church, it seats a mere 10 to 12 people.

The Peninsula Paris hotel’s L’Oiseau Blanc restaurant and bar is a perennial favourite among foodies for its yacht-like bar and two Michelin-star dining, along with stunning eye-level views of Paris’s rooftops and the Eiffel Tower beyond. Continuing the five-star theme, the elegant new Cheval Blanc hotel, set in the restored La Samaritaine Art Nouveau-era department store, was 16 years in the works and finally opened in September 2021. Spectacular views of the Seine, the Pont Neuf, Conciergerie and the entire Left Bank can be had from its Le Jardin restaurant and bar. And at the Brach hotel, in the 16th, you can cosy up to a chicken coup in the rooftop kitchen garden (chickens are for eggs only) while sipping a craft cocktail.

On the other side of the city in Pigalle, an easy walk from the Gare du Nord and Gare du l’Est, Hôtel Rochechouart’s rooftop bar is a big draw for neighbourhood hipsters, its panoramic views of Paris extending both near and far. Just up the Butte Montmartre, next to the picturesque Cimetière de Montmartre, the Terrass Hotel’s rooftop bar, restaurant and viewing area is so spectacular they named the hotel after it. With well-priced rooms to boot, this is a good address to add to your little black book.

For cinema buffs the new Hotel Paradiso, near Place de la Nation, boasts giant screens and unlimited film choices in every guest room, plus a lively cocktail bar and open-air movie screenings on Sunday nights on the rooftop garden terrace. At the Hôtel Molitor, a stone’s throw from Roland-Garros, the vibe is distinctly Californian, with views over the Bois de Boulogne and the Eiffel Tower as well as the Molitor’s two legendary pools, where the first actor to play Tarzan in the movies and the first bikini both debuted. On summer Sundays, the terrace hosts DJ sets over summery cocktails.

With six outposts and counting, Le Perchoir is by far Paris’s most popular chain of terrace restaurant-cocktail bar-nightclubs. Each of the six addresses offers an extraordinary view, but the original Ménilmontant location is still the most popular. Open year-round with heated tents in winter and lounge chairs for sunbathers in summer, guests line up outside for entrance to the hip seventh-floor space.

Lead photo credit : Le Perchoir in the Marais has eager patrons queueing to get in © Le Perchoir/Facebook